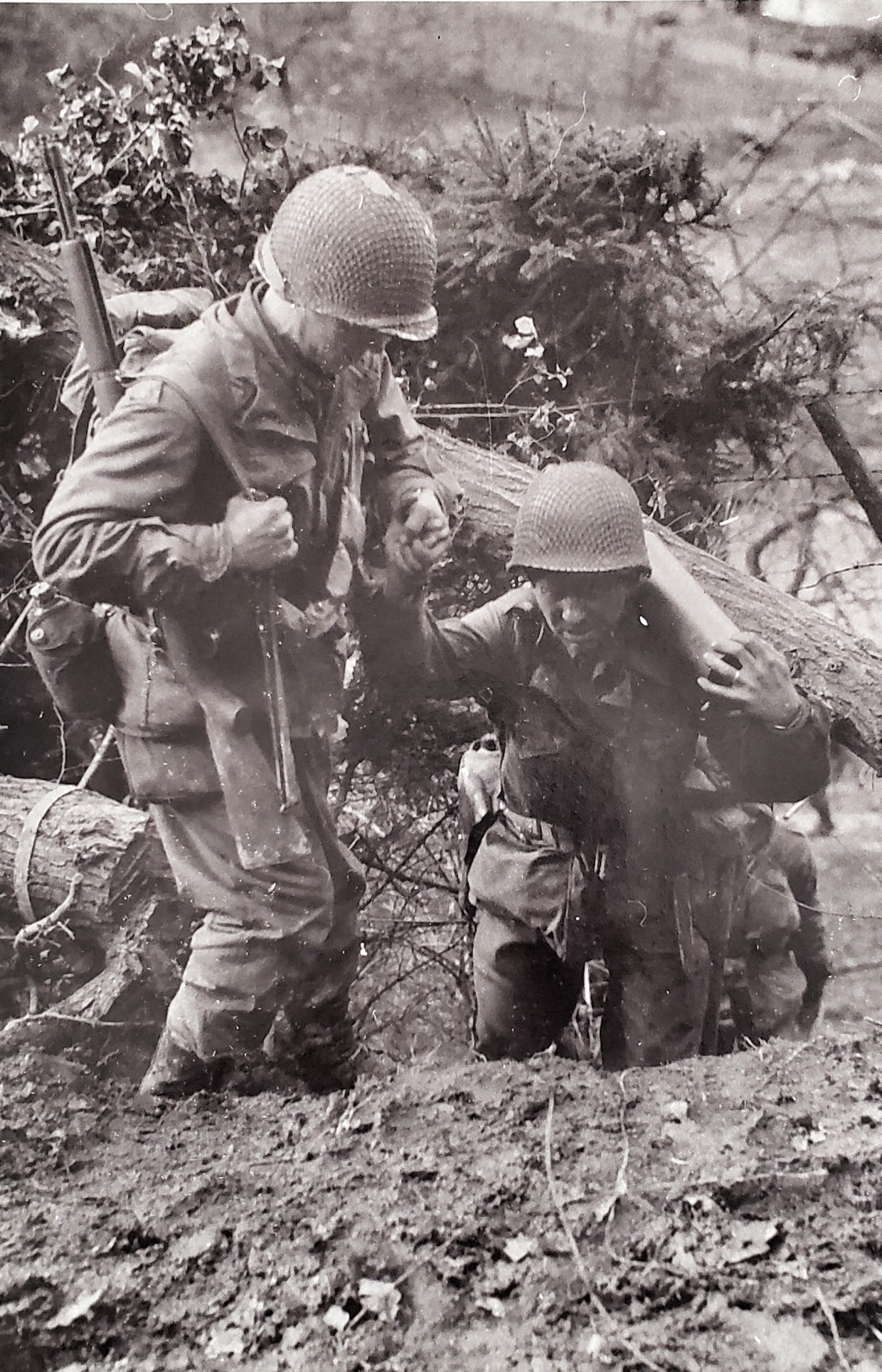 This is the second article in my series about the Grand Operational Simulation Series (In case you are wondering, here is my first GOSS post.). Full disclosure: I haven’t played any of the games in this series nor do I have any particular GOSS experience! Wait… what?

You read that right. These posts are my attempt to chronicle my experience of learning how to play the GOSS system.

If you want to master something, teach it!

So while these articles maybe (hopefully) help others, they definitely help me getting a better understanding of GOSS.

After the first post was a rather dry introduction into the GOSS rules, I thought we deserve a break and I’d share pictures of some of the components of Hurtgen: Hell’s Forest. They might give you a different angle on the scope and detail of this game system.

What comes in the box?

Is there anything you can’t find on BGG? It’s there that DocSnyder posted an inventory list for HHF. I’ll use it to make sure I won’t forget anything.

Hm, I’m not really a big fan of the box with its 11x17x2 in3 format. Yes, the map sheets need less folding, but is this really an issue for a game of this scale? It’s not that you would unfold and fold the maps on a daily basis, is it? That leaves the players that play without plexiglass. I guess, they appreciate fewer creases?!

That being said, the cover art on the box is fantastic. The picture illustrates nicely the situation in the Hurtgen Forest area.

Each sheet comes in the standard size of 22×34 in2. The picture below shows the two sheets put together. The little map to the right is a print-out of the Bloody Bucket scenario available for download on BGG. It illustrates the size of the main map.

The map art itself is functional and not obtrusive. Even multiple map features in one hex can be identified without problems. Take a look at the close-up below. It’s quite easy to distinguish wood and forest hexes. Primary and secondary roads as well as trails and constrictive terrain are sufficiently distinctive.

A turn track dominates the upper part of the map:

Apart from the dates and turn numbers, it offers information about beginning and end of scenarios, historical weather conditions (in case you do not want to role for weather yourself, see below), available Air Points (AP), Truck Points (TP), as well as unit arrival and withdrawal information. I really love this turn track. All the data you need to start a new game day.

In the upper left corner is the Replacement Table located. We will get to replacements at a later stage, but you can see already now that there are no fixed replacements. The number of replacements is randomly smeared out around a central value that varies with the date.

On the opposite side you find the weather track/table. If you don’t like the predictability that comes when playing with the historic weather, you role two d10. Date-dependent DRMs push the expectation value of the die role towards a value that describes the most likely weather conditions.

The game comes with some 1,960 half-inch, die-cut counters. About five of those seven sheets are reserved for actual unit counters.

My eye-sight is not perfect, but I don’t have issues reading the text on the counters. The game comes with storage bags, but definitely not enough if you want to store your counters division-wise.

Yes, I do laminate my player aids. Living with a small child and animals in a humid climate has taught me to protect my investments.

The unit type chart itself, like the one on the back (see below), is mostly a reminder. I can’t imagine that players will have to constantly check the chart. But it’s nice to have all counter details condensed on just two pagers.

As mentioned before, the chart is a handy reminder. It’s a little unfortunate that the list of Informational Markers is lumped together with the breakdown overview. It’s not necessarily the place where you would expect it (I understand that that’s a rather picky remark.).

Now this is a chart that probably will ‘see more action’.

As you might notice we move away from the purely information providing charts to the ‘play supporting’ ones. Cramped with die roll tables this one is probably the busiest one. If you ignore for a moment the numbers and just pay attention to the table headers you get a feeling of the detail of simulation GOSS is after. And no, this not a show-stopper for me. Quite the opposite, it makes me even more curious.

Now this is a big (11×17 in2) double-sided player aid card. There are two in the box. I’m not sure if it really was impossible to layout the content in a way to make this card foldable. The handling is awkward in this format. Yet the information on those cards serves as a crucial reminder for various game situations.

Those tracks will help with the bookkeeping of various tallies. Here is a picture of them in my current set-up for the Bloody Bucket scenario:

Withe the rules being out-of date only the Setup Book and the Historical Article are actually useful. Especially the latter one with its 40 pages gives plenty of valuable background information. I’m always very grateful when provided with such handouts. For me learning more about the historic context is part of playing a conflict simulation.

I strongly believe that you know how a ten sided dice looks like. If not, let me explain, it looks like a pentagonal trapezohedron. Two of those come in the box.

And there you have it – a closer look at some of the components that come with Hurtgen: Hell’s Forest. I’m actually quite happy with what’s inside that box: plenty of stuff, decent quality and nice artwork. Component-wise the game makes the impression of an all around solid product. Will this also be true for the gameplay? I’m eager to bring everything to the table and see all pieces interacting.

With the next article we will return to the rules. We will start going through some of the GOSS procedures, especially the ones required for Fire Support and Ground Assault.

This site uses Akismet to reduce spam. Learn how your comment data is processed.

Begin typing your search above and press return to search. Press Esc to cancel.